The item this month is an egg carton and we definitely have lots of those in our craft cupboard right now!  Last Friday the big kids each got an egg carton to create something with. 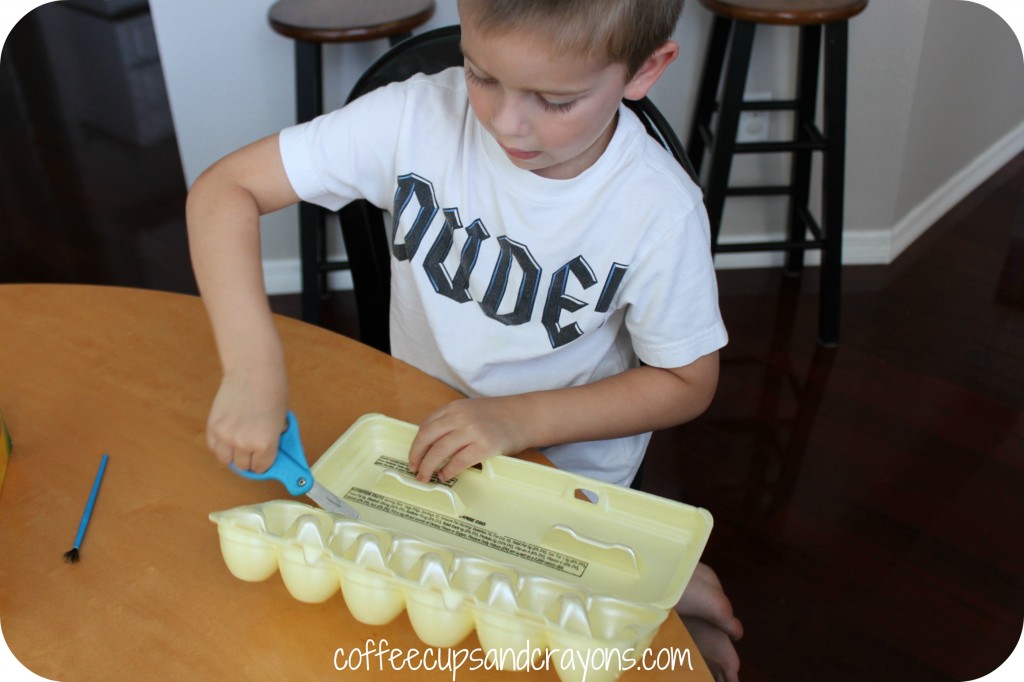 The almost 4 year old got right to work cutting even though he wasn’t quite sure what he wanted to make yet.  After he had cut the cup section into 3 parts he announced he was going to make a game and would know what kind of a game it was going to be after he finished painting it. 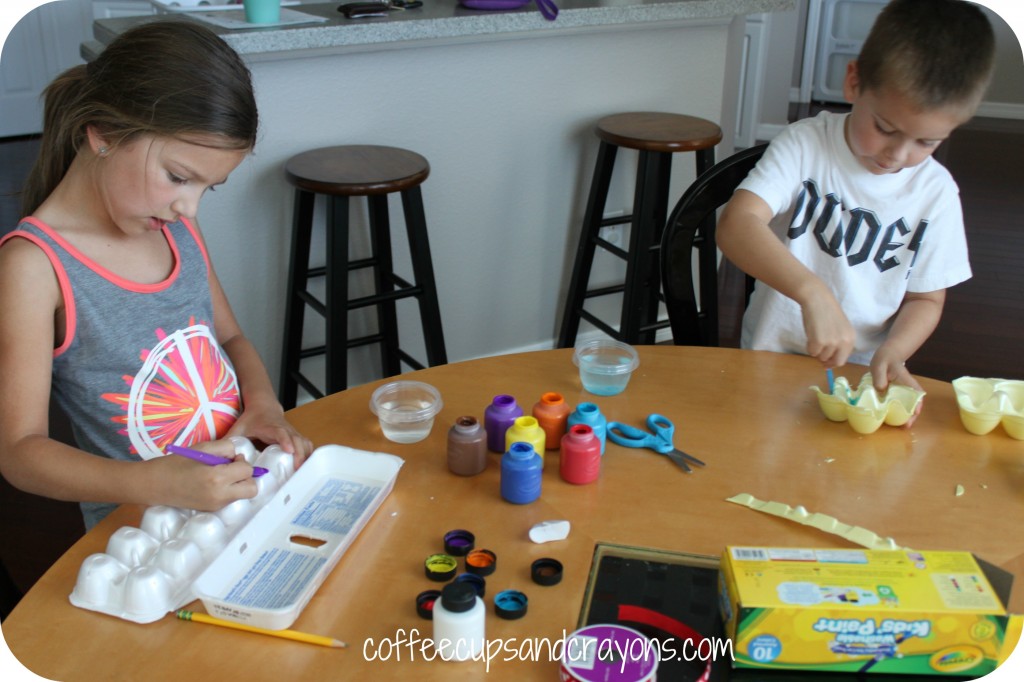 The 6 year old turned her carton around in her hands a couple times and decided it would make a perfect play computer.  She thought this would be especially good because we only have one pretend laptop and they usually need more than one computer when they’re playing.  She cut the top off of the carton and flipped it over so that the the inside of the top could be the computer screen. 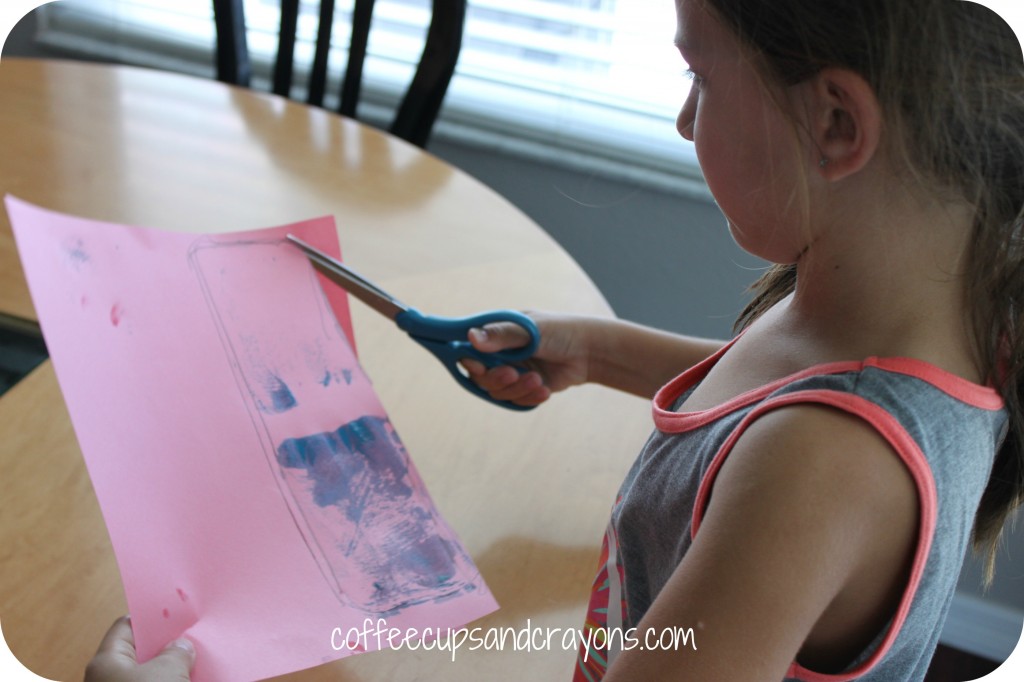 She painted the “keys” each a different color and traced and cut out paper to cover the writing on the top of the carton. 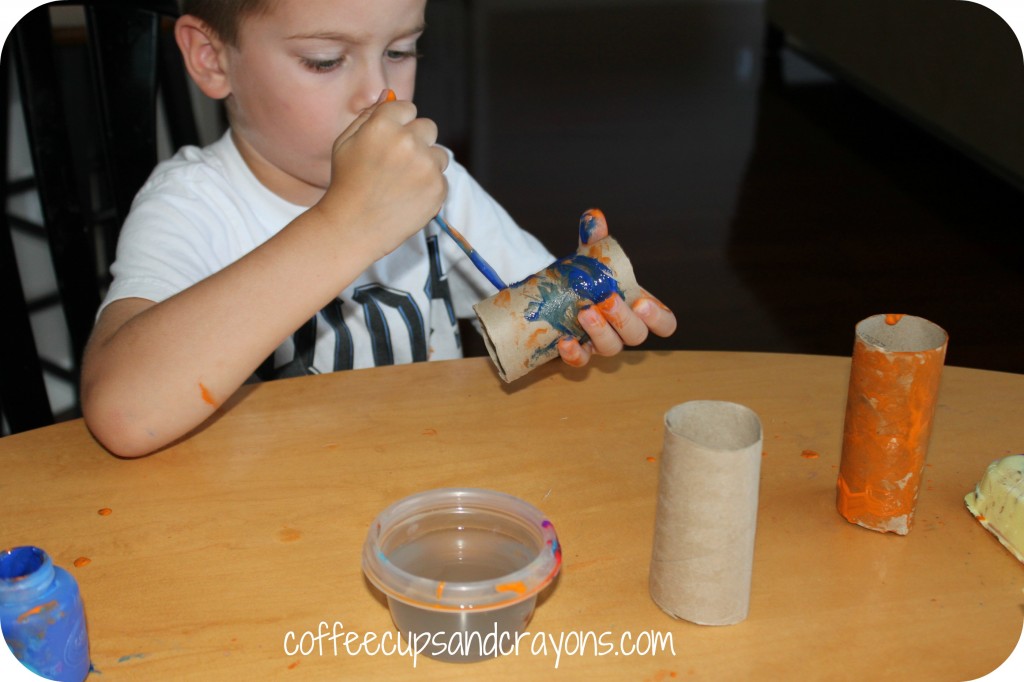 After the almost 4 year old had finished painting he decided the cartons were going to be “catchers” and that they needed handles.  He cut and painted a paper towel roll to attach to the bottom to use to hold it. 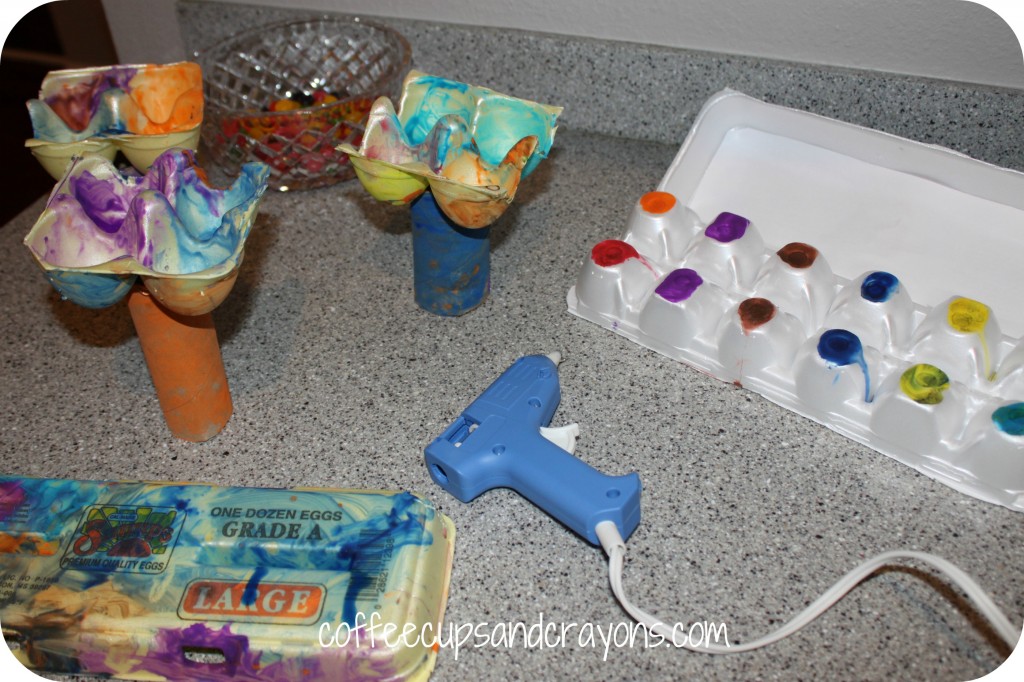 I hot glued the rolls to the cartons for the game and the top onto the bottom of the carton to make the computer. 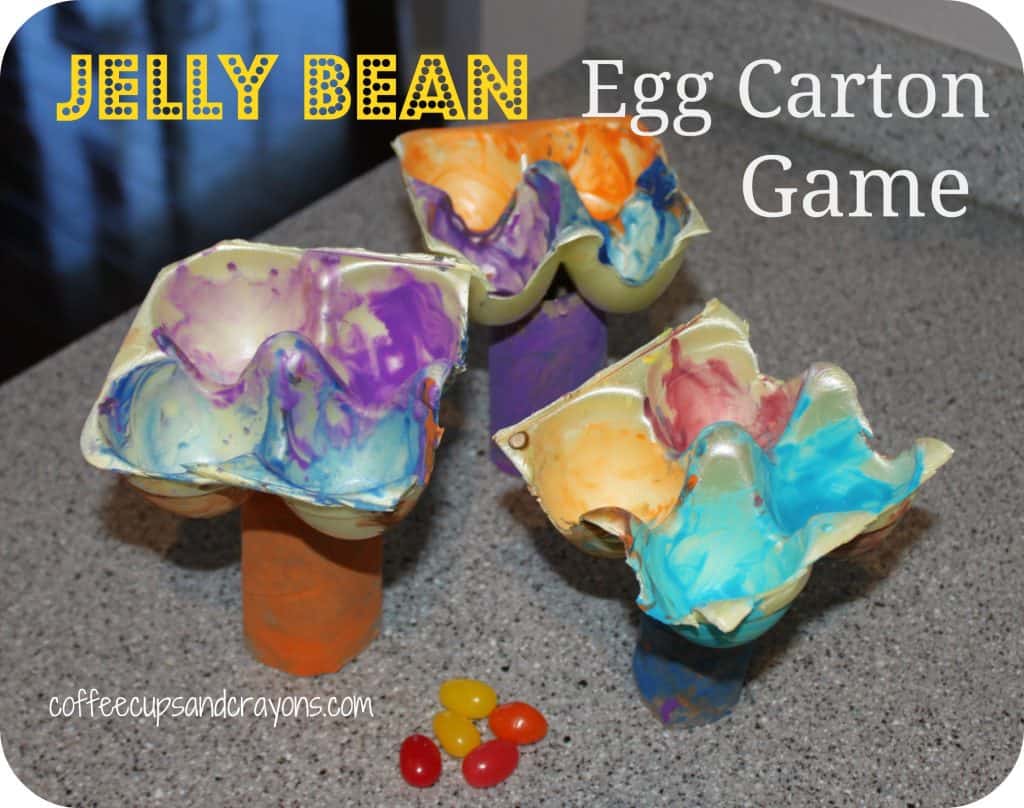 And here’s the finished game!  Instead of catching a ball in the cups he wanted to try and catch jelly beans — and his little sister agreed that was a wonderful idea! 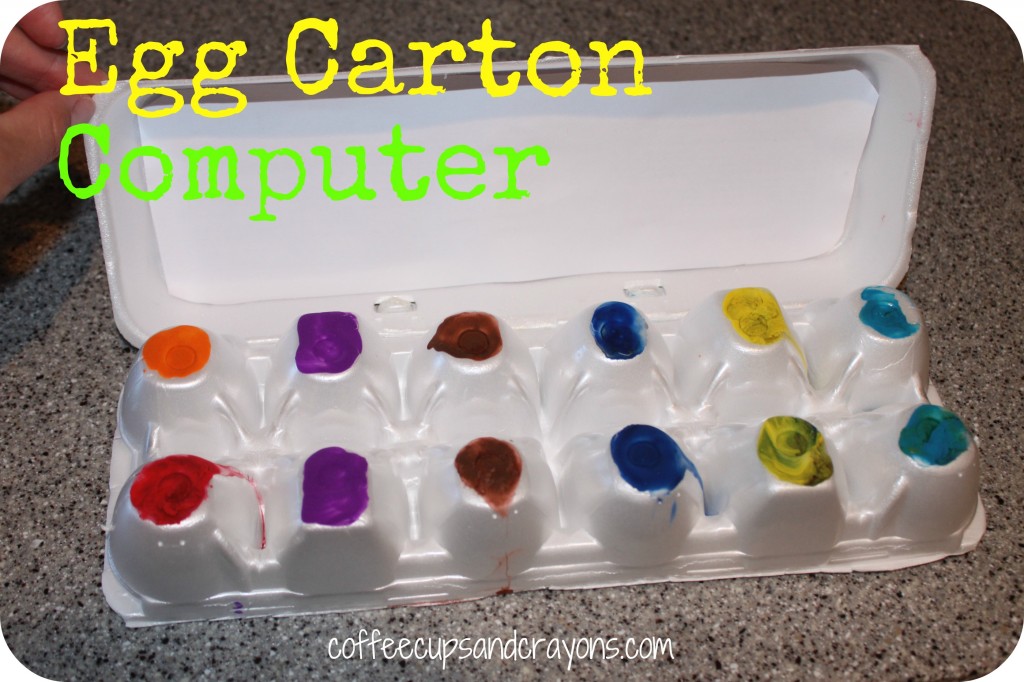 Other than making a computer for their pretend play the oldest didn’t have an exact plan for how they were going to use it until it was done.  Since then they have used it in their “office” to work on their website, to practice “typing” colors, and as part of an I Spy game that all three of them understood the rules too even though I never did.  Upcycled, simple to make, and full of pretend play opportunities — I love it! 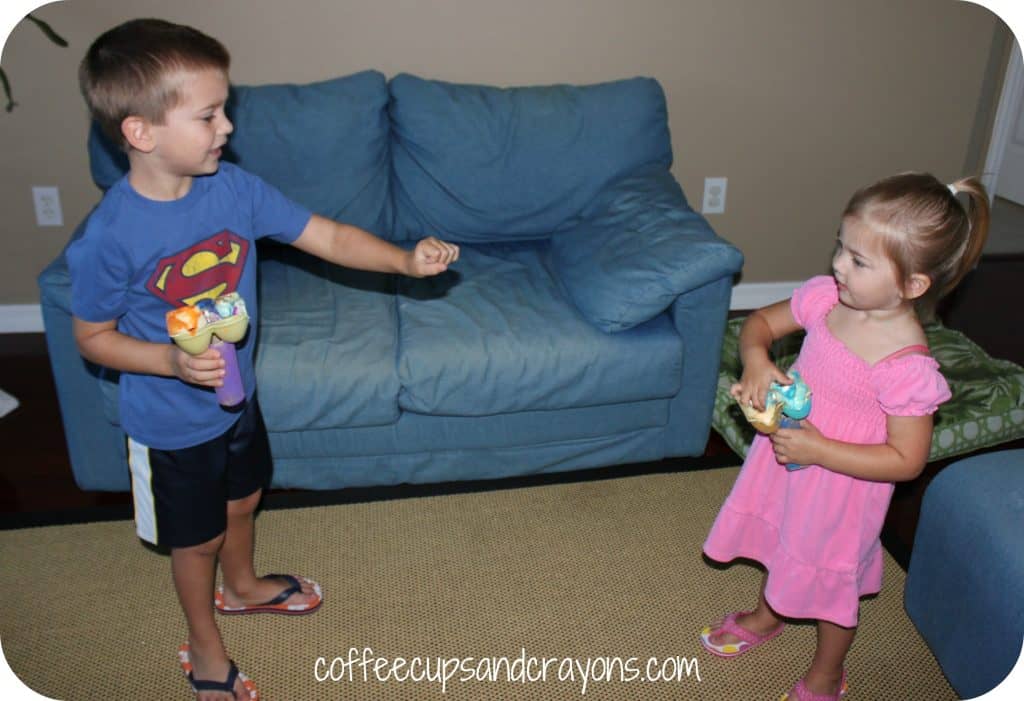 So far neither of the little two have caught a jelly bean in their “catchers,” but they have had lots of fun (and eaten lots of jelly beans) trying!

To see what other bloggers and their kids have done with egg cartons check out:

What have you created using an egg carton?  We’ve still got some left.  🙂