I recently watched a program all about what it would be like to land on the moon. Space has always fascinated me, mostly because even though we know so much about it, there’s so much more that we don’t. And that leaves room for the imagination to run wild! 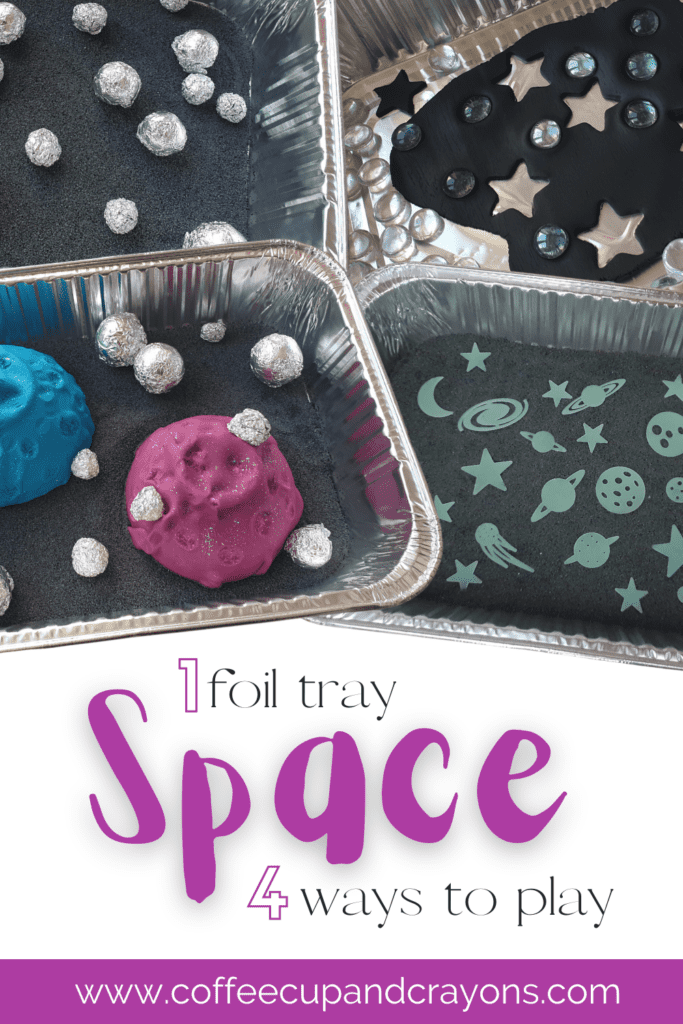 You may also choose to expand on these activities by introducing some early math skills – I’ll give you lots of ideas for that at the end of the post, but first let’s dive into what you’ll need to get started.

Silver Space Foil Tray
I used a foil tray for this play activity simply because it added a bit more silver fitting with the theme, but also because they make really great deep sensory trays which are inexpensive. If you don’t have any to hand though you could use any tray or box lid you have available.

Black Salt Night Sky
To make the black salt sensory base used in these Space themed trays, you’ll need only two ingredients – salt and black paint! Measure out enough salt to cover the base of your tray, then simply add paint and mix until you achieve the black colour you want (I used a cheap water based paint for this). Once it is entirely mixed in, either lay out on a baking tray to air dry or pop in the oven on the lowest temperature until dry.

Playdough Planets
For these trays I used both black playdough to represent the night sky, and bright colours for creating planets in the tray. Again use whatever you have to hand and get creative!
Foil Planets
I used foil along with pom poms and polystyrene balls to create foil planets.

Gems & Glow in the Dark Stars and Planets
I used some glow in the dark stars we had from my little boys bedroom and some glass beads we had left over from another sensory play activity. These can be switched out for whatever you have to hand – maybe foam stars or marbles! 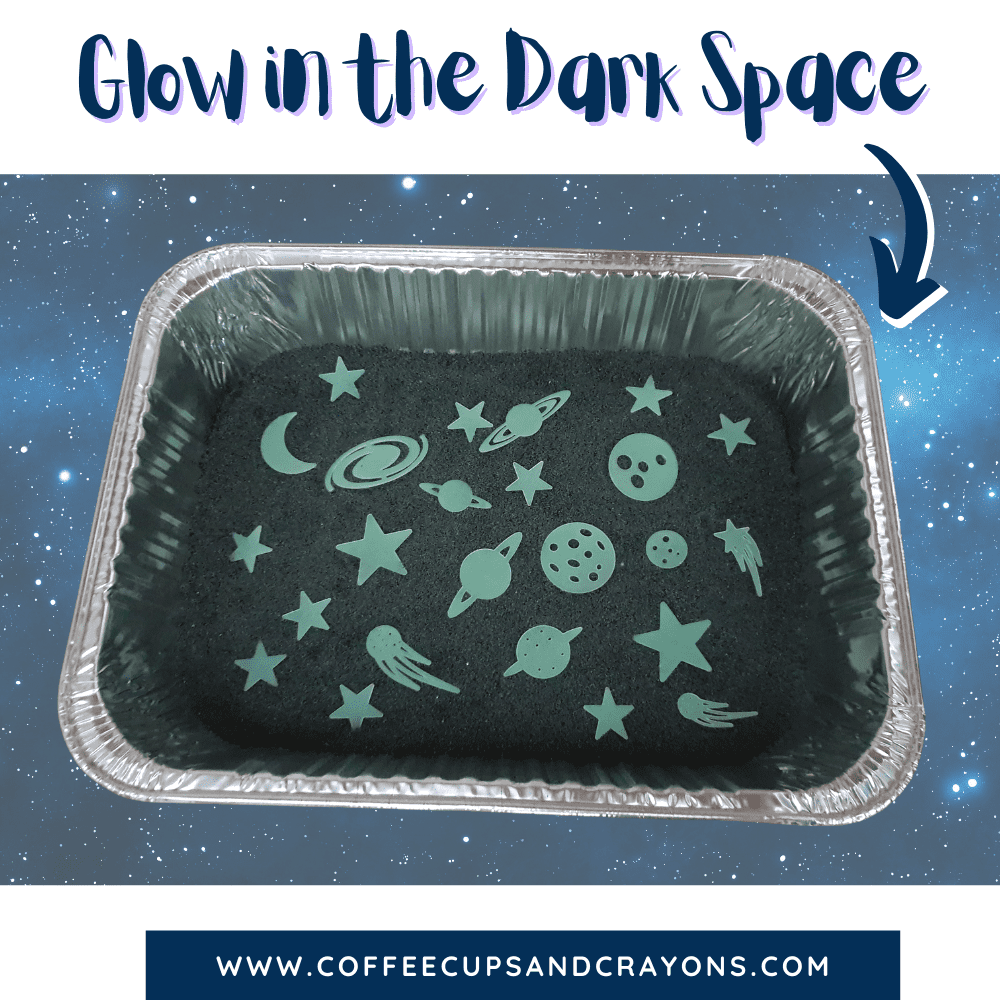 Creating a Glow in the Dark Space Sensory Bin

To create the glow in the dark space themed sensory bin, I simply added the ready made black salt into the foil tray that we used recently for our Firework Sensory Tray. I then scattered in the glow in the dark stars planets. To make the stars and planets really glow, it is best to shine a light on them (a torch works great for this) for a few moments before putting them in the tray.

You can simply wait and see what your child does with the sensory bin – or you could guide them and create a bit of a scavenger hunt by burying the stars and planets in the space sensory bin. You could give your child a paint brush and have them carefully dust away the salt to reveal the glowing stars!

Expanding the Play: Counting
If you would like to introduce a way to play and learn, then you could simply count the stars and planets that you find in the sky. Or divide them into groups of stars and planets. 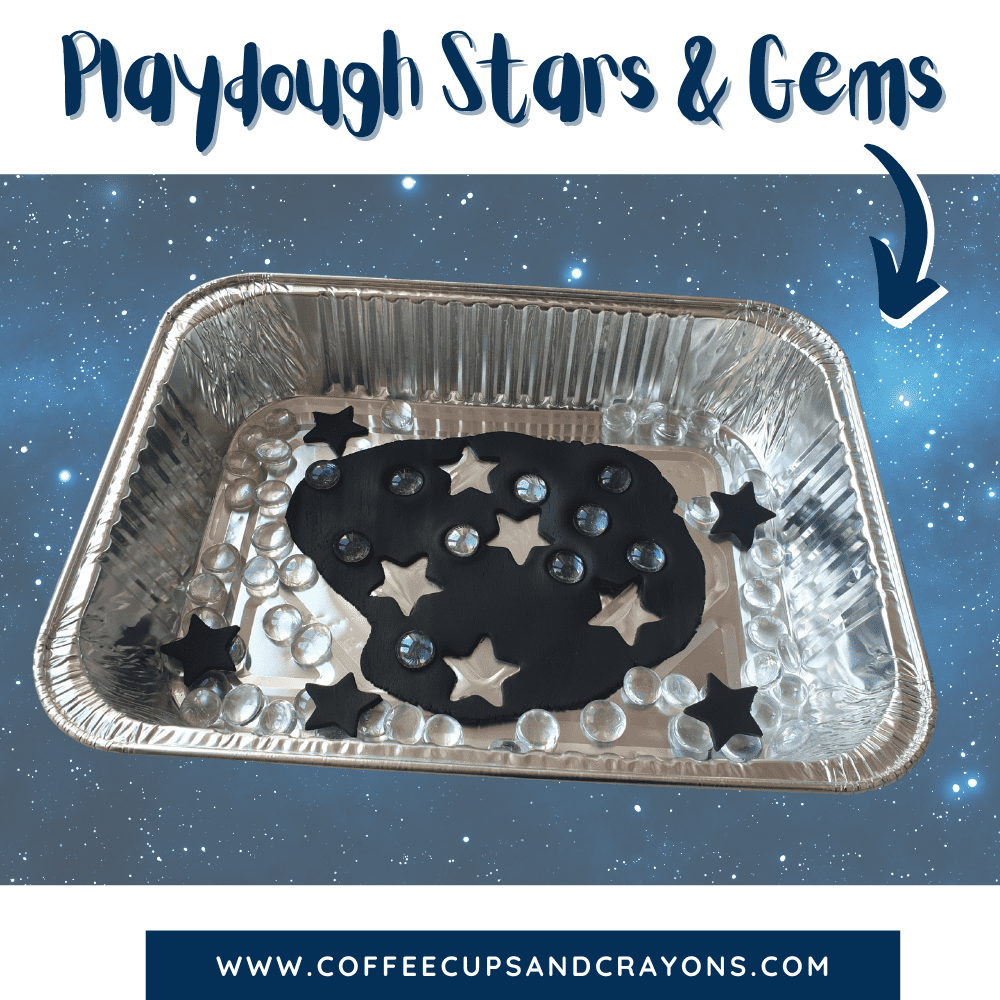 To make the playdough night sky themed sensory bin. You will need some playdough (I used black, but any darker colour would work) and if you want to make it sparkle, you could add some glitter to the dough (my kids absolutely love sparkly dough and it’s so easy to do!)

I rolled out the dough and used a star cutter to cut out shapes in the dough and added some glass beads – these are great for pushing into the dough and creating a lovely colour as the dough shines through them.

For this activity, you could either set it up as shown in the photo, or you could present your child with the dough, cutters and beads and see what they come up with. You could roll planets with other coloured dough, or add a rocket toy! You can get lots more ideas in this post about Playdough Loose Parts Ideas.

Expanding the Play: Measuring Size
A great way to help children learn about different sizes is through play activities such as this one. Using different sized star cutters, you could line up the stars in order of size, or layer them up on top of each other from largest to smallest. 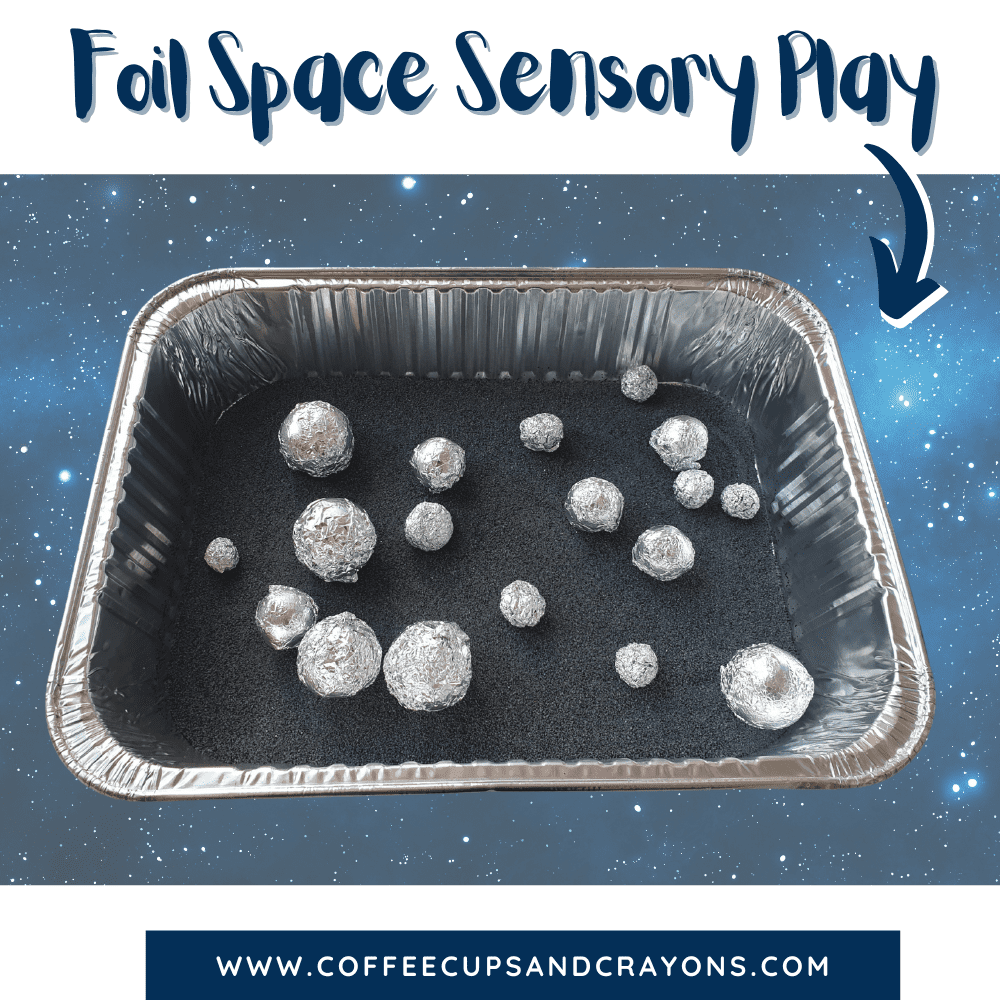 This bin is super simple but a great little space themed sensory bin! Using foil, I wrapped some polystyrene balls (ping pong balls would work great too) in foil and placed them in the tray of black salt to represent planets in space.

Depending on the age of your child, you may wish to simply let them play in this bin pushing the balls of foil around in the salt. You could add cardboard tubes to roll the balls through too. Take a look here for lots more Mini Sensory Play Tray Ideas.

You might want to involve your child in the wrapping of the foil balls as part of the activity, and they may want to make some completely different shapes with the foil (foil makes such a great material for free play).

Expanding the Play: Mark Making Shapes
If you want to take this a step further, you could encourage your child to use the foil balls to draw shapes in the salt and discuss what shapes they are. You could also draw some and ask your child to identify them. 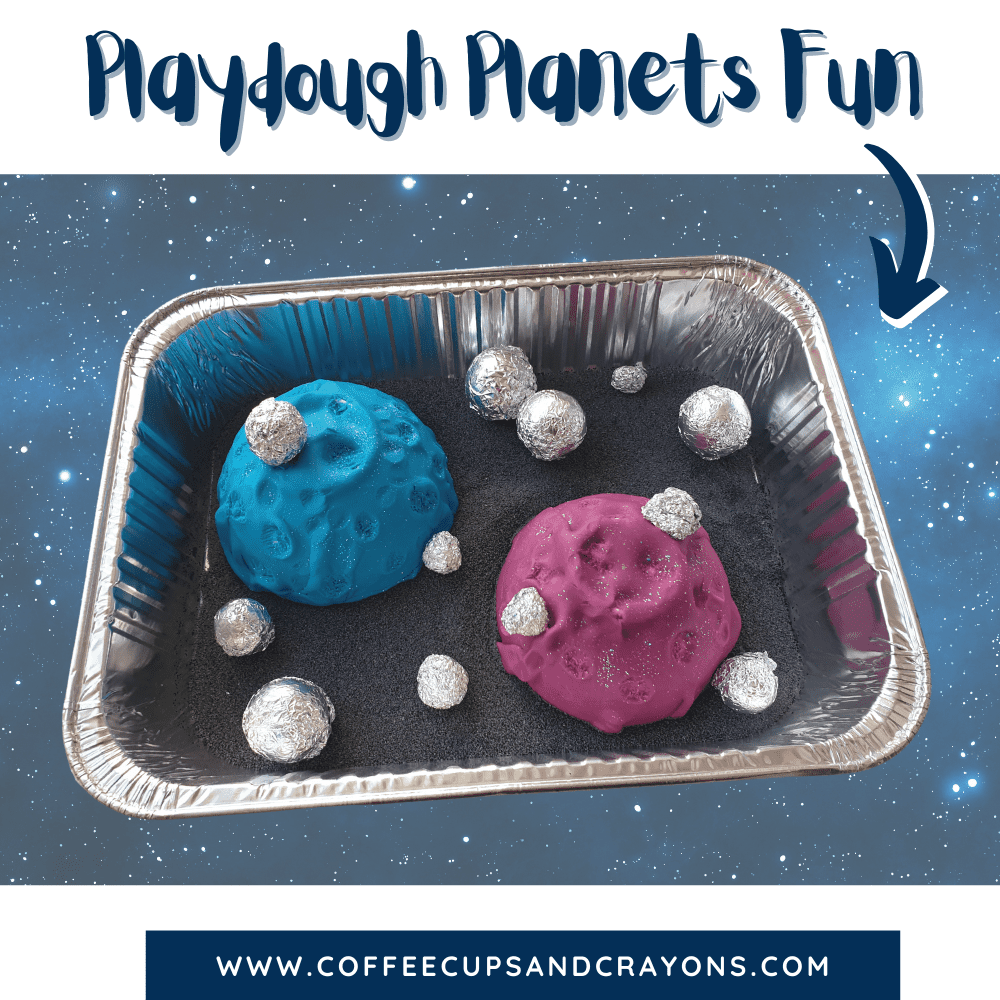 For this final tray I combined lots of the elements we’ve already used and made a sensory tray that would be great for a small world play set up if you have any rockets or toy astronauts.

To make the playdough planets I simply used upside down bowls and rolled out playdough to cover them. You can encourage your child to press the foil balls into the dough to make craters, and even stick them on too.

Adding a man to walk on the moon might be a great way to encourage your little one to get imaginative with this play set up, or they may just want to have fun mixing the dough and salt together!

Expanding the Play: Creating Imaginative Play
For slightly older children, you might want to encourage them to have a go at making their own play setting, and having a bit of a story to go with it – you may need to lead by example and then let your child have a go 🙂

I hope you have fun with these play trays at home – remember you can always mix and match and simply use what you already have on hand for lots of fun sensory space play!

Even More Hands On Play Ideas

Louisa from Mum’s Creative Cupboard has so many fun ways for toddlers and preschoolers to play.

Try these play ideas next!

50 of the Best Go To Toddler Activities 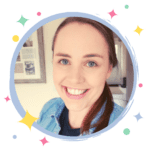 Louisa is the creator of Mum’s Creative Cupboard, a blog packed with pretty but practical play ideas for toddlers & preschoolers. You can find lots of simple ideas to keep little ones learning through play by following her on Pinterest, Facebook and Instagram