Simple math card games are a great way for kids to play with math!

Preschool, kindergarten, first grade and older kids can practice so many math concepts with just a deck of cards. Since you only need a pack of cards to play they are they perfect activity to do when you’re on the go too. 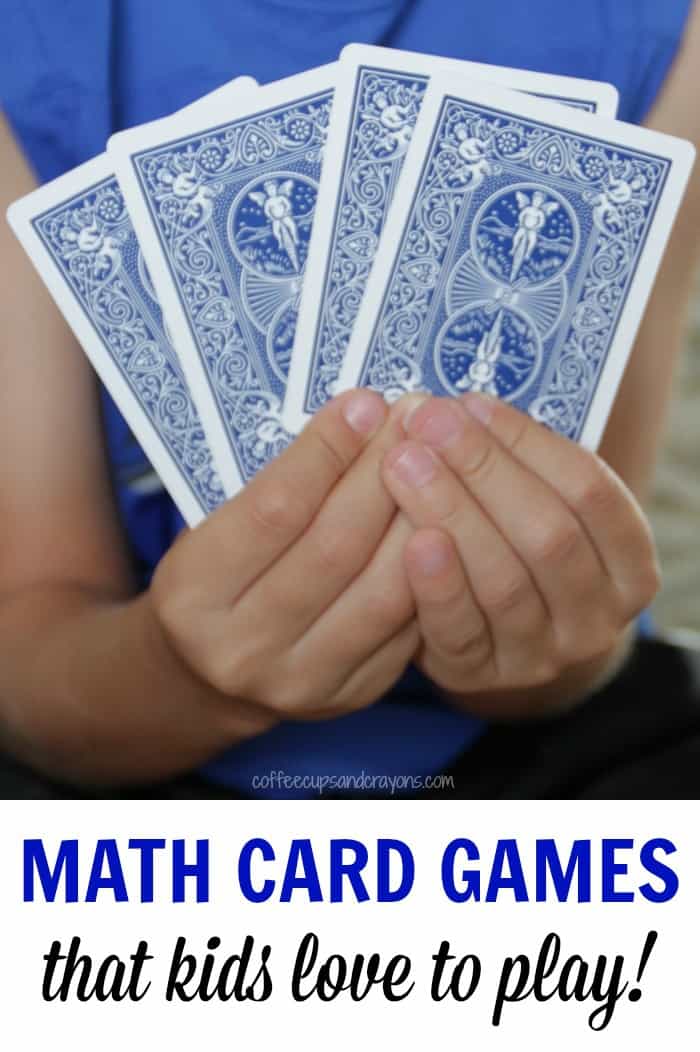 Cards are perfect to use to practice sorting. Kids can sort them by suit, color and numbers. Older kids can group also group them by odds and evens or into multiples too.

Kids can use cards to practice counting and ordering numbers correctly. Younger kids can start with just a few to order at a time and older kids can time themselves to see how fast they can be a larger group into numerical order.

Go fish is the classic number identification game. Asking each other if they have a certain number is a great way to practice recognizing the different numbers and is a good game to help get kids ready for kindergarten.

Use the different suits, colors, or face cards to create math patterns. ABC, AABB, and ABAB are common math patterns young kids should be able to start to identify and complete.

The ability to make a ten out of numbers is a math skill that will help kids with addition and subtraction. Set out cards and have kids combine them to make as many tens as they can. Kindergarten students can use the graphics on the cards to help them check to see if they are correct.

War was the favorite game when my son was in kindergarten. His teacher had them playing against each other, her and even parents and the kids loved every second of it. Comparing number values helps kids develop number sense and sets them up for success with addition and subtraction and more.

Older kids who are beginning to add and subtract numbers can play a variation of War called Hi Low. Instead of turning over 1 card each player turns over 2 and adds them (or subtracts them). The player with the higher answer wins. Much more fun than doing addition facts on flashcards. 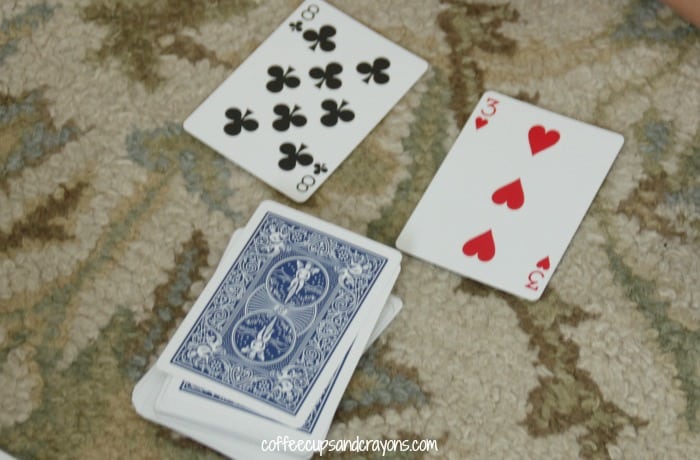 Adapt these game to fit your child’s interest or ability level to keep the learner going! For example use all the single digit cards as teens or multiple instead of adding to make the game more challenging for older kids.

We’ve had so much fun with Camp Mathematics this summer–6 weeks worth to be exact!

This is the final week of Camp Mathematics and both Erica and I are sharing fun math games. Your kids will love her cooperative dice games so go see how to play!

Have you missed a week of Camp Mathematics? Catch up now!

Week 1: DIY Abacus for Kids and Counting Down Math Game

Our 6 week Camp Mathematics may be over but the best thing about the internet is that YOU can do them at home anytime!

How to Take Better Pictures of Your Kids
Sunflower Craft